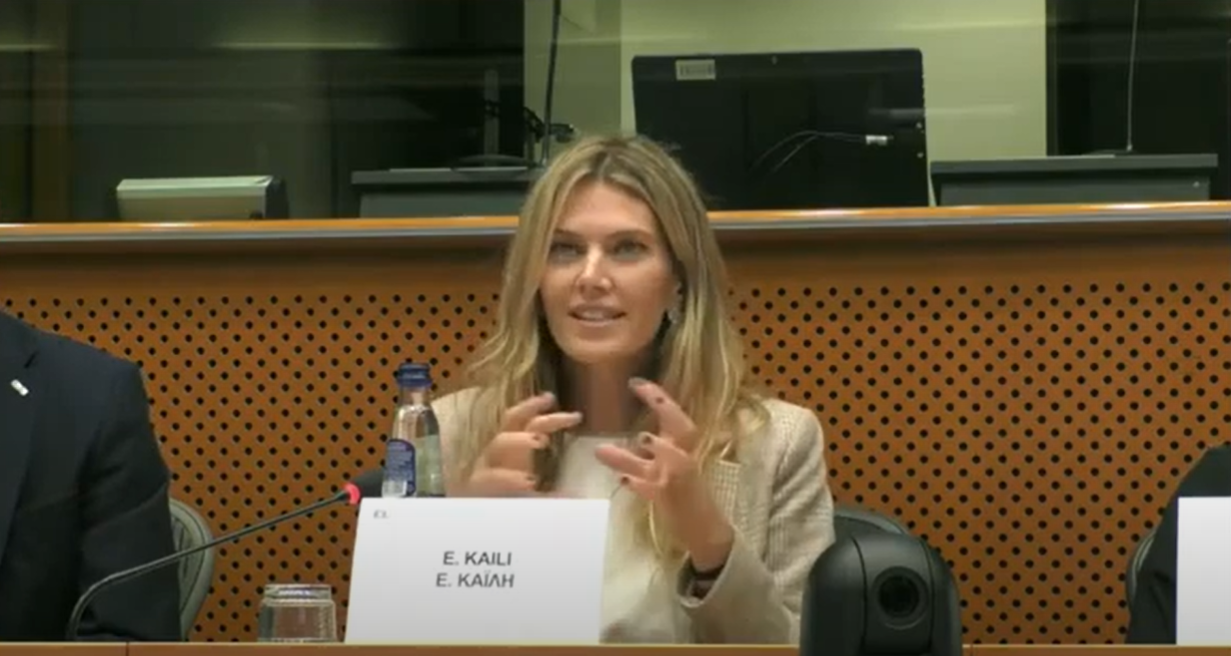 In her opening remarks, EU40 President and Vice President of the European Parliament, Eva Kaili (seen above), stressed the need to ensure sustainability in the real economy, and likewise impressed upon the audience just how important it was for the UNSDGs to be adopted into EU law. Continuing her comments, Kaili highlighted that corporate social responsibility was one of her portfolio oversight roles as EP VP, and emphasized the need for private sector leaders to do more. She also noted however that the EU itself needed to be more ambitious in how it responded to the challenges faced by the green transition. Regarding SDG progress (EU commitments), Kaili spoke of the significance of ‘Voluntary National Reviews,’ which are set to be presented at the UN in 2023, suggesting that this opportunity could be used to reflect upon what has been done and what more needs to be accomplished. She also emphasized the need for greater resilience and innovation if true progress is to be made, and stressed the critical role played by SMEs. VP Kaili concluded her remarks by brining to the fore existing issues and possible solution safeguards surrounding forced labour and the general exploitation of workers, which she described as a form of modern slavery. 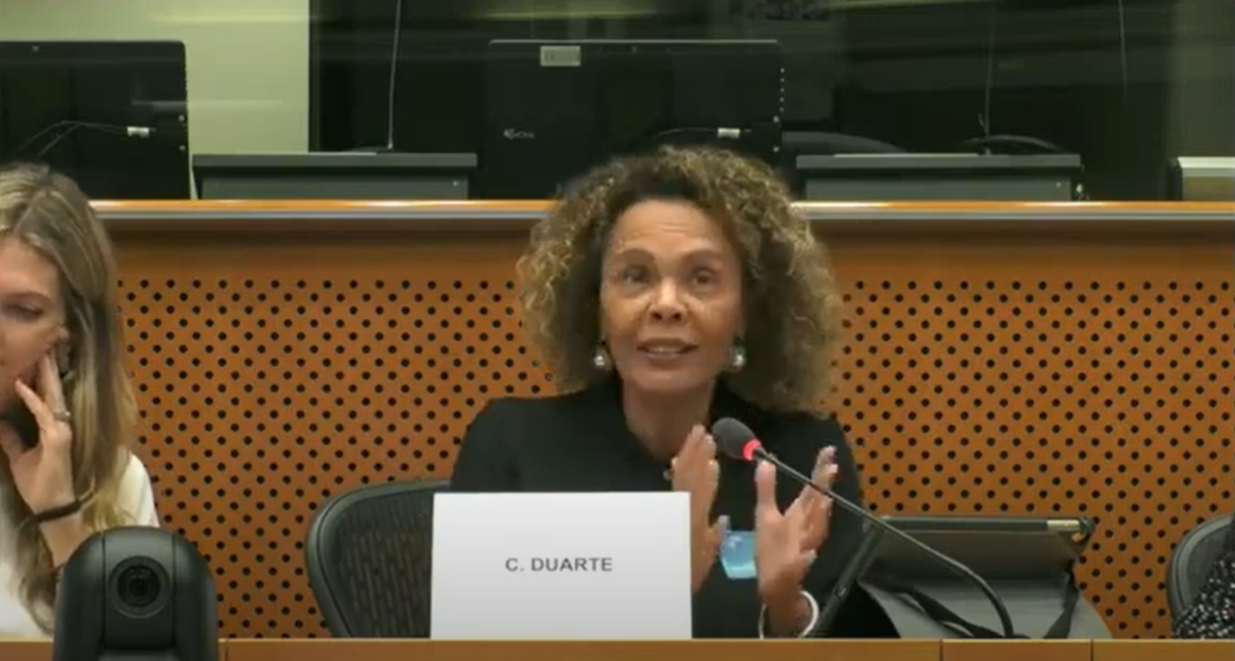 UN Under-Secretary-General and Special Adviser on Africa, Cristina Duarte (seen above), opened her remarks by noting that her contributions would be from an African perspective. She stressed to the audience that one size does not fit all, emphasizing that Africa was the most underdeveloped region in the world. She also highlighted the need for collaboration rather than competition in how these transitional goals are achieved. Duarte noted how short term solutions were simply not the answer, describing instead how the issues stemming from the green transition were long term in nature. Regarding the approach taken by developed nations towards Africa, the Under-Sec.-Gen. outlined the need for deviation in how impediments to progress can be resolved, stating: “Please do not make us equal, because we are not. Difference is an asset, it is not a problem or an obstacle.” In a later contribution Duarte stated: “Our challenge in Africa is energy access. But you are asking me to transition? Africa’s contribution to CO2 is 3.8%. If you take out South Africa, it is only 0.5%. And you are asking me to transition? I am already there! Don’t ask me to transition if I am already there. We do have, as a planet, the same destination, ‘green.’ This is unquestionable. But please, recognize that we have different starting points. And consequently, different ways of reaching the same destination.” 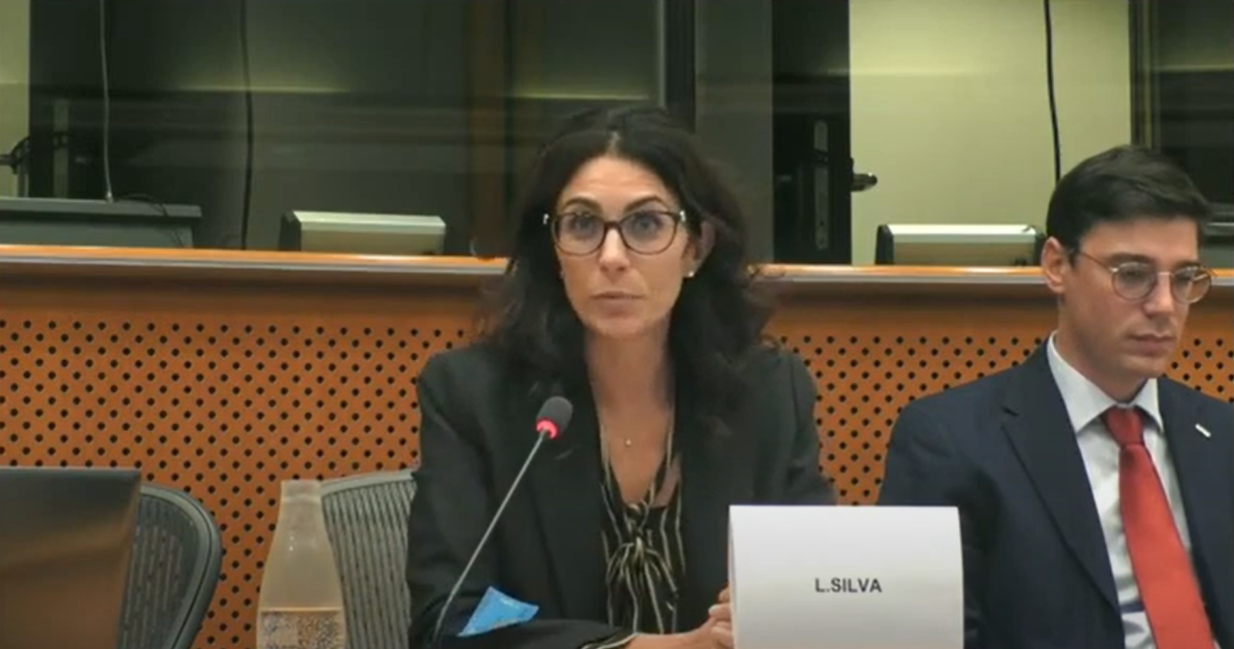 In her opening remarks, Ms. Lucia Silva (seen above), Head of Sustainability and Social Responsibility at Generali Group, highlighted what sustainability meant to her in her current role. While stressing the obvious need for corporate profitability, she also nonetheless emphasized the critical necessity for multi stakeholder alignment, through a combination of “people, planet and profit.” According to Silva, “for a company to survive or even thrive, it cannot only focus upon their investors and shareholders, but instead, needed to engage with multiple stakeholders.” Specifically regarding the intersection between SMEs and sustainability, she noted how, “if we want to transform Europe in terms of sustainability, we need to transform SMEs, and really help and support SMEs to be more and more sustainable.” Moreover, Silva also spoke of an informative survey which Generali conducted in collaboration with a leading university. She described how the survey, which interviewed over 1000 European SMEs, appeared to suggest that a significant percentage of SMEs (40%), were not in fact adequately prepared for the challenges associated with green transition, calling for significantly more focus and leadership in this area. 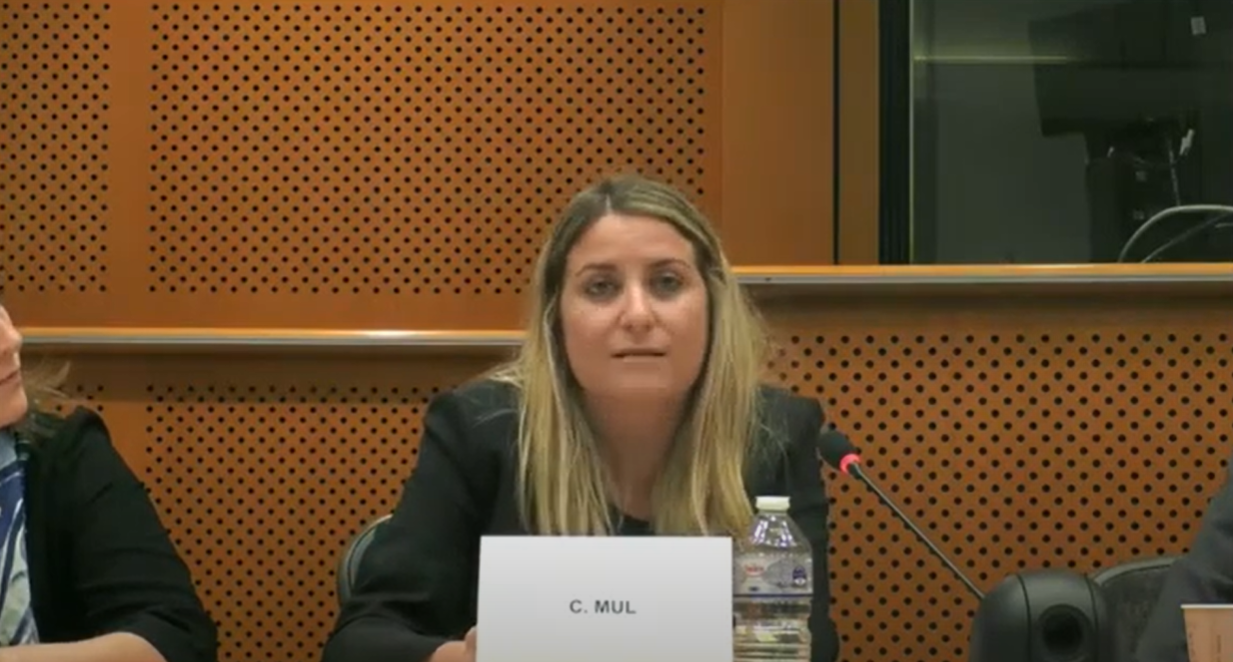 Ms. Cecile Mul (above), CEO of Mul Group, opened her remarks by firstly detailing what it was her SME does, its business model, and importantly, how they incorporate a strong environmentally sustainable ethos throughout their operations. Ms. Mul also outlined how she carefully integrated a supply chain, allowing them to work more and more with farmers directly. She likewise noted how a multi-stakeholder approach is needed if success is to be achieved. 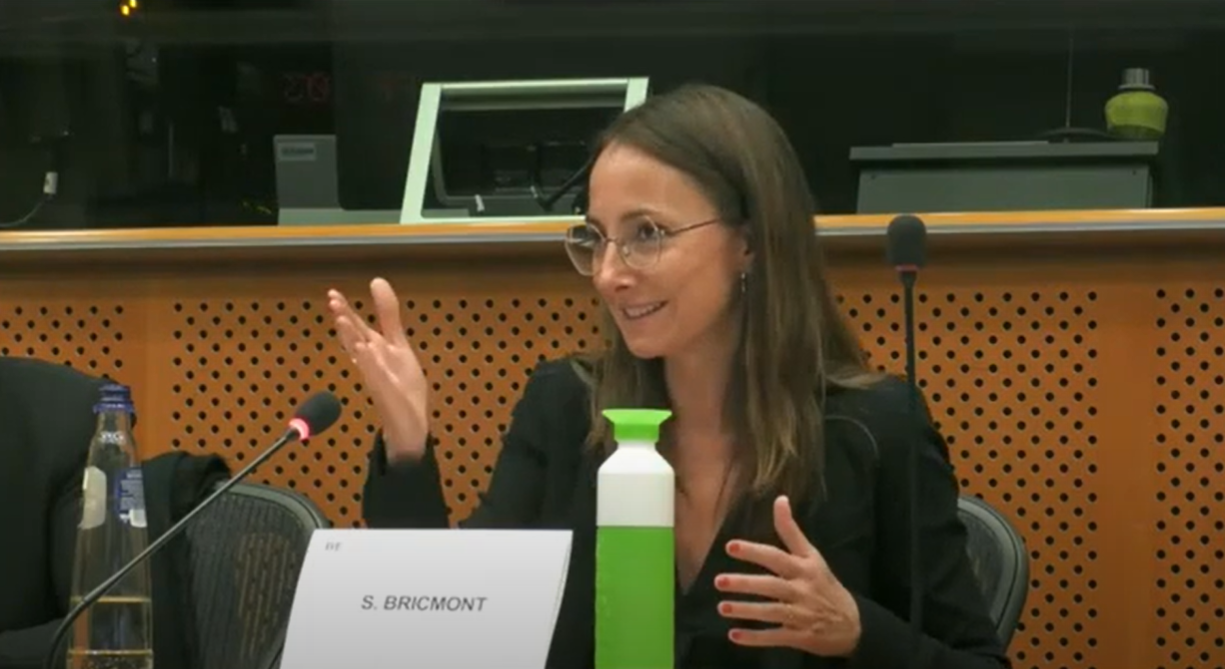 In her opening remarks, Ms. Saskia Bricmont MEP (Greens, Belgium), seen above, noted the importance of a related file, the corporate due diligence directive. She acknowledged, however, that the scope of this directive was not broad enough, focusing instead on larger multinationals rather than small corporate entities. In her view, this was a mistake. Bricmont stressed the need for a more holistic approach in this area, one which is open and adaptable to difference. She also spoke of the need to create stronger SME communities by putting in place support structures which facilitate and enhance engagement, thus further promoting the objectives as set out by the UNSDGs. 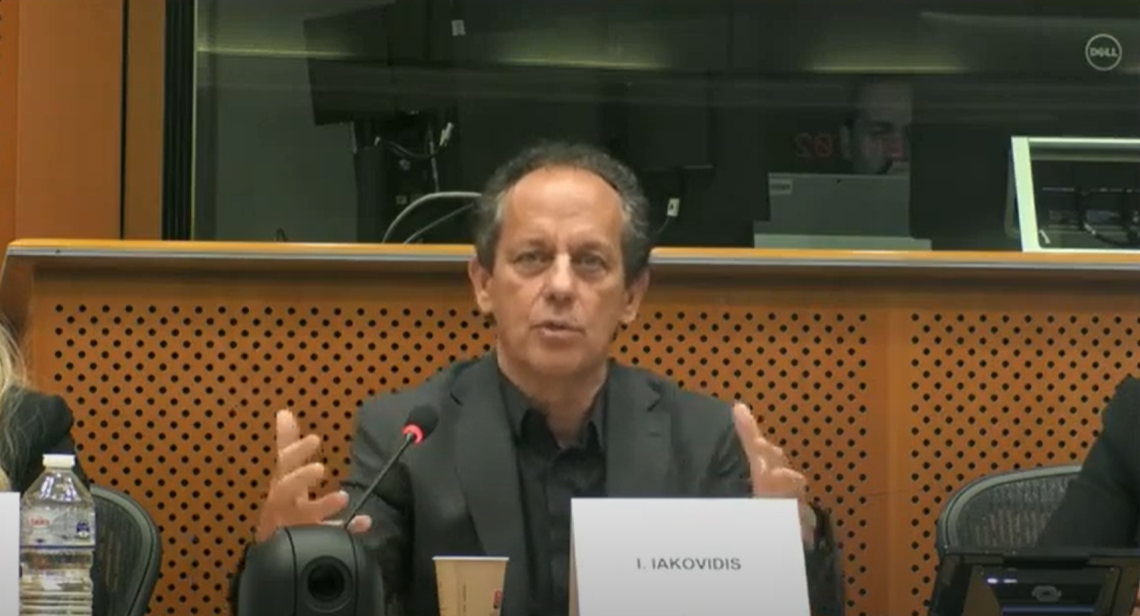 During the opening remarks of Mr. Ilias Iakovidis (seen above), Adviser for Societal Challenges; Green and digital transitions at DG CONNECT (EC), he informed the speakers and general audience that he had decided to scrap his original pre-prepared talking points, stating that he wanted to prove such discussions could avoid becoming collective monologues. He strongly emphasized the key role of cooperation in helping to achieve greater sustainability. Iakovidis suggested that while there was much discussion in Brussels political circles about the need for greater EU independence across many distinct policy fields (i.e., to be independent from resources; chips making), we should in fact be striving for greater interdependence as far as sustainability policy is concerned. Stating: “We are all interdependent. The climate crisis will never be solved if we all, as continents, as regions, as countries, as companies, strive to be independent. Interdependence is the paradigm which we should strive for on the international scene.” Iakovidis also remarked that he felt politicians and others were too focused on short term gains, while being blind to ‘glacial,’ slower moving environmental shifts, which will likewise be devastating for future generations.

The full event recording is available below: